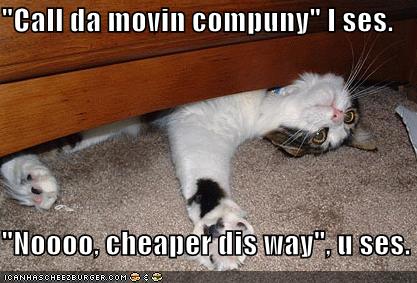 “By the time you’re my age, you expect that you know a thing or two on your own,” Bob said. “But it turns out that there were many, many things that I depended on my wife Jillian for. Now that she’s gone?” He smiled a sad smile and shrugged his shoulders. “It turns out I don’t know nearly as many things as I thought I did.”

One of those thing Bob’s wife Jillian handled was arranging the move every time Bob’s career caused the family to relocate. “Now that it’s just me, I qualify as a small household,” Bob said. “I don’t have as much stuff anymore. I’ve given so much of Jillian’s furniture to her children, and kept just the stuff I need.” The downsizing left Bob with only a few pieces of furniture to move.

“I thought about doing it myself with one of those rental trucks,”Bob said, “But who is around to help me lift this heavy furniture? My friends are all just as old as I am!” Hiring a Eastern MA moving company that specializes in small moves allowed Bob to let someone else do all the heavy lifting.

One of the primary advantages of hiring a moving company for your small move in Eastern MA is that you don’t have to worry about loading or unloading the moving truck yourself. Furniture and boxes of possessions are heavy! If you’re not in great shape, it’s easy to injure yourself while moving. “I’m seventy-six years old,” Bob said. “I don’t consider myself frail by any stretch of the imagination, but I won’t kid you: if I drop that couch on myself, I’m going to feel it.”

Choosing an Eastern MA moving company for small moves also allows Bob to save money. “Choose a moving company that has no minimum load size requirement!” he said. “Why pay for truck space you don’t need?”

"In August, my 83-year-old father fell down the cellar stairs and broke his elbow. Following elbow replacement surgery in Boston he was transferred to skilled nursing care in West Bridgewater. Unfortunately, the injury left him unable to maintain his own household. My husband and I made the decision to move him to our home in California. My time frame was incredibly short - 11 days till departure via airplane to CA. I needed to pack and ship whatever items would be going to CA. We would not be moving the entire household - just several paintings, memorabilia, clothing and a large full keyboard electronic piano. After calling several moving companies that required large weight minimums to bid the job, I was referred to Joe Fell at Boston Pack and Ship.

Joe was absolutely wonderful. He calmly explained the shipping options available through Boston Pack and Ship and they could definitely handle the job. Joe helped me locate appropriately sized shipping boxes so that I could pack things up myself, thereby saving money. He also stayed in constant contact with me via phone and email, coaching me through the shipping process. We scheduled pickup nine days after my arrival in MA. Joe became an instant friend to me throughout this extremely stressful time. His caring nature made this difficult move a great deal easier. I am very grateful to have found this wonderful company. "