You are here: Home / Packaging Solutions / Getting good wood on shipments 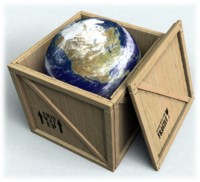 As a small load-shipping specialist, we build crates to fit some rather unique sized objects-e.g. artwork, grandfather’s clocks, high value computer servers/electronics. Yet for overseas shipments, that crate not only has to fit whatever is being shipped, but be made from the right wood.

You see, in recent years, there have been a growing number of incidents of infested wooden crates being shipped overseas. This has caused damage to trees, vegetation and crops abroad and in the U.S. (e.g. there was a recent case involving longhorn beetles in Worcester). That’s why new customs laws require any international shipment to be stamped by a governing body. Hence the importance of Boston Pack and Ship’s recent certification by the Northeastern Lumber Manufacturers Association (NeLMA).

Established in 1933, NeLMA is the rules writing agency for Eastern White Pine Lumber and the grading authority for Eastern Spruce, Balsam Fir, Spruce Pine Fir (SPFs) species grouping and other commercially important eastern softwood lumber species. For wood to be used for a crate going overseas, it must meet NeLMA’s criteria of being heat-treated for 30 minutes at a temperature of 133 degrees F. This treatment eliminates the possibility of infestation by beetles and other insects that could literally jump ship when the crate reaches its final destination overseas.

“Many of the softer woods like spruce can’t be used for overseas crates because though they have been heat-treated, they have not been treated for the right length of time and temperature,” said Joe Fell, co-owner of Boston Pack and Ship. “That’s something that NeLMA really stays on top of. Even with our certification, we still undergo random audits to ensure that every crate that ships out of here meets NeLMA standards.”

"At a minimum, we use Boston Pack and Ship on a monthly basis to ship servers and other IT hardware for new projects as well as existing expansions. Besides the care they give to the product being shipped, Boston Pack and Ship’s customer service from beginning to end is stellar. They consistently follow up and if there are any issues, they take care of them promptly. Boston Pack Ship, by far, is the best and safest way to get your shipment from here to there and not have to worry about it arriving in more pieces than it left."
Jason Michalczyk